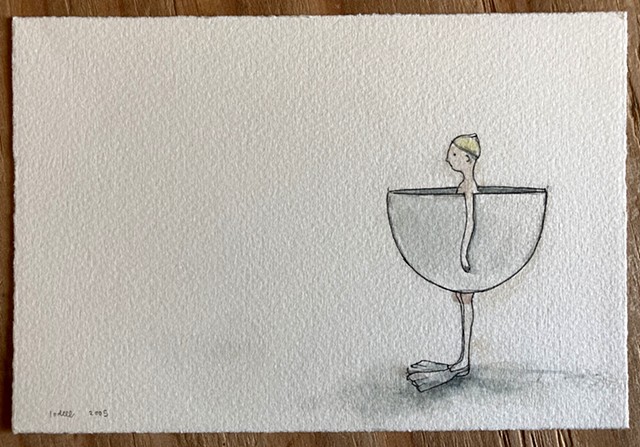 Illustration for a book of poems by Logan Esdale: The Opiate of Words (Phylum Press, 2006)

Original watercolor and ink on paper.

This original drawing and others like it are for sale on my Etsy page! About the book:

Logan Esdale and Lara Odell’s The Opiate of Words (Phylum Press, 2006) appears whimsical and playful. This book is a conversation between Esdale’s prose poems and Odell’s illustrations. Inside the dark blue cover, Odell’s little people dressed in geometric cones or with flippers on their feet and swim caps on their heads — face ten prose poems. Despite their wackiness, the drawings feel oddly somber. If the people are small still-lives, freeze-framed on a white page, the facing poems share a similar stationary tone. There’s an even pacing to the language, recreating a sense of the unending forward progression of time — not at a speeding pace, but in the integrals of the daily. “With 365 feelings a day, every day becomes a year,” he writes in “Speeding Ritual”. “In human years the time goes quickly, that way.” (...) Geometry is important here, as are metaphors of travel and motion. Esdale’s speaker considers his narrative from some distance, and through the intersection of the daily with metaphysical concerns. “The car door is struck, and I cannot get out. It may be said of love that two people push against each other with an equal pressure.” A pleasure in this work is the speaker’s self-reflection, erupting in unexpected moments: “Ah, those silly reversals — such as how my parents took my behavior as a child so personally, and now I do the same.” (Gravity Meter). – Rachel Moritz